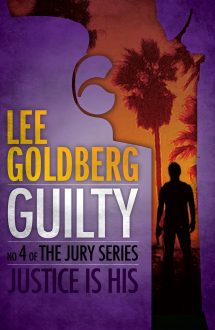 Brett Macklin faces his greatest adversary yet–a ruthless, professional hit woman, seductress and master of disguise who launches a campaign of terror and bloodshed against him, pushing the vigilante to the emotional and physical breaking point, unleashing a bloody killstorm on the L.A. streets.

“GUILTY is a direct sequel to PAYBACK, so in no way can I go into details.  But Goldberg holds nothing back in this one, that’s for sure. Bodies pile up real quickly, proving Macklin is not one to screw with.” —Bruce Grossman, Bookgasm

Lee Goldberg’s The Jury Series serves vengeance hot with loads of action and plenty of suspense to keep you turning the e-pages. Vigilante justice was never so much fun,”  —Joel Goldman, bestselling author of “Motion to Kill.”

“Violence, sex, and more violence, The Jury Series gives you all of this along with smart-aleck one-liners and dark humor. Satisfaction guaranteed for action junkies,”  —Paul Bishop, LAPD Detective & author of “Citadel Run”

“Generous helpings of sex and violent action, along with some smart-aleck dialog,” —J.A. Konrath, bestselling author of “The List”

(This is the fourth book in the series and was previously released on the Kindle as .357 VIGILANTE: KILLSTORM)

Other books in the series: JUDGMENT * ADJOURNED * PAYBACK