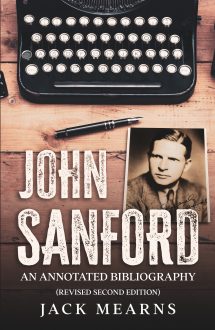 The revised, second edition of the definitive book on John Sanford’s work…now available for the first time in ebook and as an affordable trade paperback

In recent years, author John Sanford’s writing has experienced a resurgence, with the republication of four of his classic novels, in addition to his selected letters. In 2003, just before his death, the Los Angeles Times called him “an authentic hero of American letters.”

Born Julian Shapiro in 1904 in Harlem, John Sanford was inspired to write by his childhood acquaintance Nathanael West. William Carlos Williams, Ernest Hemingway and James Joyce also were important early influences on Sanford’s themes and style. But Sanford developed a style all his own, as a bold and uncompromising innovator who pushed the boundaries of fiction and literature.

During his lifetime, Sanford authored 24 books, including novels, creative interpretations of history and several volumes of memoir and autobiography. His monumental five-volume autobiography was titled Scenes from the Life of an American Jew. Both Sanford and screenwriter Marguerite Roberts, his wife for over 50 years, were blacklisted during the McCarthy era in the 1950s.

Sanford’s career as a writer was star-crossed. His first ten books were issued by ten different publishers. Sanford quarreled wissth editors and alienated people throughout the publishing industry. Each of his books represents the culmination of a struggle. Thus, for Sanford, perhaps more so than most writers, there is a story that goes with each book.

This bibliography recounts those struggles as a means to chart Sanford’s development into the peerless writer he became. Annotations address style and content of the works described, as well as the often winding road these works took toward publication. There are three appendices, including indices of historical pieces and of his family members and acquaintances. This book is an valuable and interesting resource for those seeking to learn more about Sanford’s life and work, as well as, more broadly, scholars of American literature.