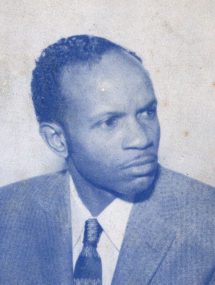 Warner Jackson aka W. Warner Jackson (1915-?) was an African-American, Kansas City-based author of three novels: The Birth of Martyr’s Ghost (1957), Lust for Youth (1960) and Cavern of Rage (1961). He was born in Spur, Texas, was a graduate of Kansas State Teacher’s College, and worked as a railroad porter, cook, hotel houseman, laborer, machinist, painter, and mail carrier. He worked at the Commerical National Bank while also writing novels.

All three novels by Warner Jackson, a long-lost African-American author of noir fiction, rediscovered and back in print for the first time in over sixty years and now in one ebook collection. THE BIRTH OF THE MARTYR'S GHOST (1957), LUST FOR YOUTH (1960) and CAVERN OF RAGE (1961).

The Birth of the Martyr's Ghost

Tou'saint Chaney is shot down over the Pacific during WWII... and spends seven years as a castaway on a desert island before he's rescued. The experience radically changes him, physically and spiritually. He returns home with a new love for his fellow man and a deep devotion to God...attitudes that put him in dangerous conflict with everyone from his old way of life.

A woman competes with her daughter in a tantalizing game of seduction. A sexy, pulp fiction classic, back in print for the first time in over 60 years!

Alice Ingram is a bartender and single mother who can’t seem to tame her sensual emotions, a persistent, burning craze for strong, physical release… without it, she is plagued by persistent headaches, anxiety and loneliness. Lately, she’s found solace and ecstasy in the arms and dusky body of much younger Eddie LaRose, a gambler evading the law. And who, the police warn her, might also be a thief and murderer. She lives with her daughter Freita, a recent Junior College grad and aspiring dancer, who suffers from the same, physical torments as her mother… and doesn’t know if she can wait until marriage to slake her erotic desire. She can’t. And she won’t… and soon she’s pitting herself against her mother for Eddie, who gladly beds both women, unaware that he’s making the riskiest bet of his life.

Not financial ruin, nor even social ostracism, nor even a raging flood could tear the two of them apart from their forbidden love and it's shattering climax in a cavern of rage.