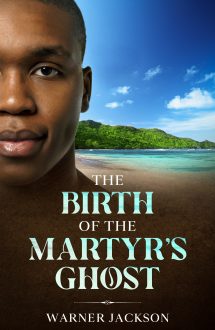 The Birth of the Martyr's Ghost By Warner Jackson

Tou’saint Chaney is shot down over the Pacific during WWII… and spends the next seven years as a castaway on a desert island before he’s rescued. The experience radically changes him, physically and spiritually. He returns home with a new love for his fellow man and a deep devotion to God…attitudes that put him in dangerous conflict with everyone from his old way of life.

Published in 1957, The Birth of the Martyr’s Ghost was the first, published novel by Warner Jackson, aka W. Warner Jackson, an African-American author who lived in Kansas City, Kansas. He was born in Spur, Texas and worked as a railroad porter, cook, hotel house man, machinist, painter, and mail carrier, among other jobs. He would go on to write only two more novels, Lust for Youth (1960) and Cavern of Rage (1961), under his name. If he wrote others, they were under pseudonyms or went unpublished (his first completed novel, The Right Answer, apparently never found a publisher). Unfortunately, little else is known about him.