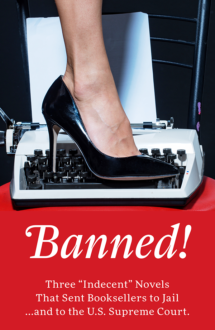 Three novels, banned as “indecent, lewd and obscene” in the late 1950s and early 1960s, that sent booksellers to jail for selling them and led to landmark U.S. Supreme Court cases… and that are tame by today’s standards.

DESIGN FOR DEBAUCHERY by March Hastings

The novel is about a family with wealth, prestige and the stature befitting their heritage. Yet beneath the veneer of respectability, smoldered a hidden evil. Why was the father so intent on securing the seduction of his own son? Why did the hauntingly beautiful Robin have a look of fear in her eyes?

Previously published as Sweeter Than Life and The Twisted Loves of Nym O’Sullivan. In 1953, undercover police officers in Los Angeles bought a copy of Sweeter Than Life from bookseller Eleazar Smith, charging him with obscenity. He was tried and found guilty. He appealed the case to the U.S. Supreme Court, which ruled in Smith’s favor. The court didn’t rule on the issue of whether Tryon’s book was obscene… rather they argued the ordinance made booksellers criminally liable for selling and stocking “obscene” books on their shelves, without proof the bookseller knew anything about the content of the books. The court decided this violated the due process clause of the 14th amendment.

VEIL OF TORMENT by March Hastings

This lesbian pulp classic was banned, deemed “unmailable” by the U.S. Postal Services, in 1960 and rated “indecent” in the U.S.A and Canada by the National Organization for Decent Literature. Now back in print for the first time in over sixty years.

Her blood raced, her body pulsed, her desire was a thing of madness.

There’s the Ivy Sherwood the public knew: the actress, the glamorous, beautiful darling of the stage, living a storybook life of champagne and roses with her glittering future ahead of her.

And then there’s Ivy off-stage, away from family and friends, prowling the streets, hardly recognizable without make-up, her eyes shining with tension and craving, picking up any stranger, going into any dingy bedroom.

Also published as The Sherwood Scandal.