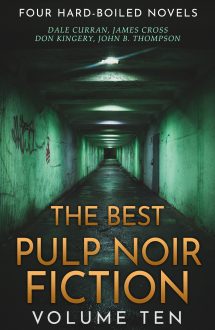 The novels are:
DUPREE BLUES by Dale Curran
Dupree is a hot trombone player who plays his music from his heart. Then he meets Betty, a singer whose sweet music comes from her aching desire. What she wants is a diamond ring, but if he gets it for her, it will cost him much more than money, plunging him into a whirlpool of sex, betrayal, gambling and murder.

THE DARK ROAD by James Cross
American lawyer Harry Benton, who has been working in post-war Berlin, is recruited by the U.S. secret service to retrieve some important papers from a high-level Russian that were given to a pastor in East Germany for safe-keeping. But all is not what it seems and Benton is soon plunged into a conspiracy involving smuggled diamonds and the formula for a deadly bacterial weapon.

DEATH MUST WAIT by Don Kingery
Jed is a poor trapper living in the Louisiana Bayou and supporting his impoverished parents, his drunk brother, and his prostitute sister. His life takes a dramatic turn when he kills a man in a bar fight and is hunted down by a brutal Sheriff. Now Jed must prove his innocence in the face of rampant corruption…or die trying.

RAYNE STORM by John B. Thompson
It’s 1959, and the Cold War is Red Hot. American spy Rayne Cantey is sent on a secret mission to Asia, where he must obtain a smalll, steal box containing a deadly secret that could tip the balance of global power. His life is in constant peril as he loves and battles his way from Honolulu to Hong Kong. Rayne can never be sure who is on his side… and who wants to put a knife in it…and that includes the enchanting and seductive Taneeta, who is half-Dutch and half-savage and pure, sweet poison.