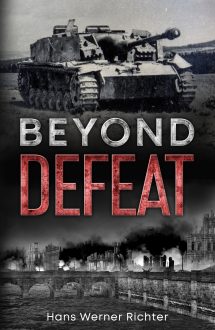 Beyond Defeat By Hans Werner Richter

“More powerful by far than All Quiet on the Western Front and much more frightening.” Minneapolis Star-Tribune

The novel was inspired by author Hans Werner Richter’s (1908 – 1993) own experiences as a German POW. He went on the write several critically-acclaimed novels and non-fiction books.

“It’s a gripping read, and a wonderful look at what things were like on ‘the other side’ in World War II.” Brendan Dubois, #1 New York Times bestselling author.

“This is as important a document and as powerful a novel as  All Quiet on the Western Front.” Montgomery Advertiser

“This is perhaps the finest novel to come out of post-war Germany. ” Kansas City Star

“A powerful, moving book… a story that begins with bare, harsh, stabbing realism…rapidly becomes a story whose chief interest is the ideas behind the action. And ideas, in the long run, are more exciting than bullets.” Oakland Tribune