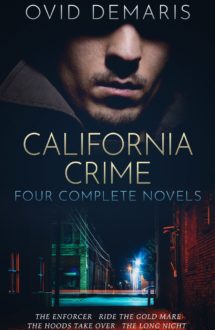 Four brutal, hard-charging crime novels set in Los Angeles in the late 1950s… when the East Coast mob was making a big move to the West Coast and leaving a trail of bodies and blood in their wake…. by international bestselling author Ovid Demaris, an expert on organized crime.

“Demaris is a writer of real talent…as good as pulp fiction gets.” NB Magazine UK

Corrupt LAPD cop Vince Fusco crosses a big line when he executes a drug dealer for his drugs and his woman… but things get worse when he realizes there might have been witnesses. Now he’s violently raging through the sordid alleys and back streets of L.A.’s drug culture, searching for the witnesses and a big heroin shipment. The only one standing in Fusco’s way is a lowly reporter on the crime beat… a guy who has more bourbon than blood running through his veins… chasing a story that could be his final byline.

THE HOODS TAKE OVER

The East Coast mob has moved to Los Angeles and nobody seems willing to stand up to their campaign of terror. But that changes when a young teacher out shopping for groceries witnesses a brutal mob murder, identifies the killers for the police, and is immediately targeted for death. It’s one ordinary man with integrity up against mobsters without a soul. He doesn’t stand a chance… or does he?

This book was adapted into the 1958 movie Gang War starring Charles Bronson.

“Published in 1957, this crime story still has the power to shock. Even now this kind of nakedly nihilistic thriller isn’t common, this is the kind of novel the term ‘Noir’ was coined for. Brutal and doom laden, this vision of the world as it really is makes your heart race while your mind rages at the unfairness of life.” NB Magazine UK

Vince Slader is an ex-cop-turned-PI who is hired by a casino to hunt down a gambler with a $28,000 tab in return for a percentage of the debt. It seems like a straight-forward job until Slader winds up framed for murder. As if that isn’t bad enough, he becomes a target of hard-charging politicians and the West Coast mafia.

When someone needs bribing, beating or killing, the L.A. mob sends The Enforcer to do the job. He drives the flashiest cars, he wears the most expensive clothes, and he beds the hottest women. He has the connections and the money to buy just about anything… or anyone… that he wants.

But now The Enforcer is being hunted… by a young, ambitious cop. The Enforcer knows there’s only one way this can end… with one of them in a grave. That’s fine with him.