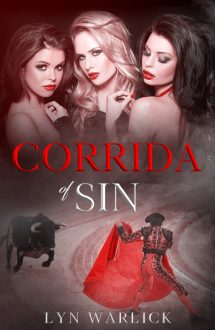 Corrida of Sin By Lyn Warlick

Guy Moran stands alone in the plaza de toros, the matador they call El Oro, the Golden One, in his flashing cape and wielding his naked sword. His life is a string of close encounters with death and calculated assaults on lust.

That’s the passionate cry from thousands of women as they see him in the bullfighting arena,  proving his virility and strength as he spears the black, frothing, charging monsters. All the women want him…and the six foot tall, American matador gladly takes them, using them ruthlessly, mercilessly, as they give themselves to him in screaming fury, in unleashed lust that threatens to kill him as brutally as a bull’s horns.

There’s his wife Madge, who is as hungry for men as he is for women. There’s Bambi, a woman desperate for his animal passion. And there’s Vita, the high-born Spanish girl who risks ruin if she gives in to her desire for this reckless matador, this killer of bulls, and this possessor of women…

…a man who now realizes the greatest danger to his life isn’t in the arena, it’s in his bed.

“Lyn Warlick” is a pseudonym for an unknown author and was used on only one book, Corrida of Sin. The same book was later reprinted  as The Bed and the Sword under yet another pseudonyn, “Harold Robeson,” also used only once.