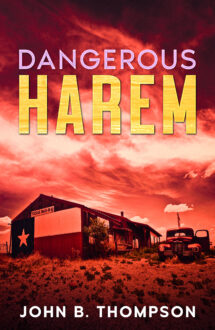 Dangerous Harem By John B. Thompson

Ex-G.I. Frank Barden is an unlicensed investigator hired by a millionaire to be his personal, in-house detective, unearthing the secrets of his family and his investors. It’s a pursuit that reveals the powerful passions of the woman in the tycoon’s life: Little Dene, who has sex, murder and money on her mind…and in that order. Big and beautiful Prett, who can brawl almost as viciously as she can love, and there’s Marlo, whose cunning and lust were more than a match for any man.

This novel, originally published in 1952, was substantially rewritten and re-released nine years later under the title TEXAS TRAMP by a different publisher. Both versions are available from Cutting Edge Books.