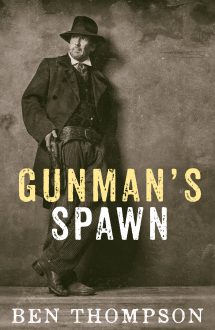 A Roaring Epic of Texas Guns

Into the Big Bend Country rode wild Dunc Stewart, headed for trouble and the girl, Carmelita. Then old Hamp Wallace took cards into the game, his blazing guns siding law and order. Dunc knew that some day he’d be sharing a triple showdown with Hamp and the notorious Jugg Allison…and one of the three was the fastest draw in Texas. They wouldn’t know who until the last man was standing.

“Ben Thompson” was a pseudonym of John Burton Thompson, best known for his racy, sexy pulp novels of the 1950s and 60s. This was his bid for a “break-through” novel and, decades later, he still stung from the book’s failure to become a big success and vault him onto the wider, western market.