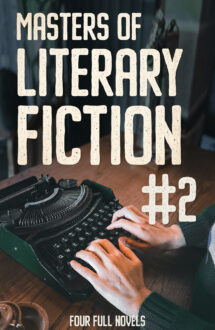 The Freebooters by Robert Wernick
A long-lost, World War II literary classic in the dark, satirical tradition of Catch-22 and M*A*S*H, though it pre-dated those landmark novels by decades. When The Freebooters was released in 1949, it was greeted with widespread acclaim, the San Francisco Chronicle declaring it “the best American war novel to arise so far.”

Face of My Assassin by Jan Huckins & Carolyn Weston
“An exciting melodrama dealing with integration in the South…a thorough examination of southern racial attitudes. The book has the power to move and enlighten readers.” Los Angeles Times

Ivan Balin is a Chinese-Russian photographer who lives in Tokyo but is about to get a visa to achieve his long-held dream of moving America. He is involved in heated affair with Faye Wilson, an intensely erotic, and intensely neurotic, American woman, but he also finds himself passionately drawn to the Tamiko, an aristocratic Japanese woman working as a librarian at the Tokyo Press Club. Tamiko is skilled in the arts of love, but forbidden to practice them with men of other races — until she decides that to win Ivan for herself, she must spirit him away to a mountain retreat and break every taboo she knows.

Crow by Donald Stewart
“The story is intense, dramatic and powerfully built. Stewart has drawn characters convincingly and well. He demonstrates the consequences of harsh, unthinking actions on an inherently good man.” Washington Post

John Dietche was unjustly imprisoned for a theft he didn’t commit. He breaks parole and returns to the upstate New York country where his family once lived…and where his wife, pregnant when he was imprisoned, died in child-birth, his estranged daughter raised by others.

Now John is hired. simply for room and board, by an unhappily married couple to work their bleak, struggling farm. He soon begins a heated affair with the sex-starved wife, who threatens to turn him into the law, and send him back to prison, if he doesn’t cater to her every whim, physical and otherwise. So he does, suffering a different kind of imprisonment, one every bit as soul crushing as what he escaped. Their strange affair soon escalates into searing violence….and into his tragic history repeating itself.