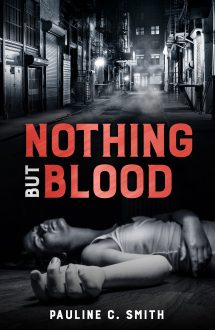 Nothing But Blood By Pauline C. Smith

Los Angeles. 1962. The body of Mary Barnes is found in a seedy hotel,… with a bloody X carved into her breast. Is it a signature? Or something else? Laine has been investigating homicides for the L.A. Sheriff’s department for years, patrolling streets as pallid as a tired prostitute, but this case is different. Why was Mary in a cheap hotel, and where was the baby that she’d recently given birth to? His search for the answer could lead him to a truth that’s too dark and unsettling even for him, a hard man who believes he’s already seen the worst horrors the city has to hide. He’s wrong.

Pauline C. Smith (1908-1994) was the author of several novels and many short stories, including the Edgar Award finalist My Daughter is Dead, published in Alfred Hitchcock Mystery Magazine.