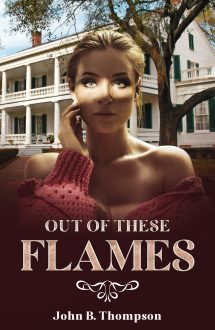 Out of These Flames By John B. Thompson

It’s the early 1950s. Plantation owner Colonel Bertram Fendelson finds himself having to raise Larry, his dead brother’s grandson, after the boy’s parents die far too young. The Colonel hires Eleanor, a local waitress who is college-educated and the target of the morally-righteous women in town, to tutor his nephew. But Eleanor is no Mary Poppins, and her presence is like touching a flame to gasoline, igniting a household that’s already raging with resentment, greed and barely-controlled lust.

John Burton Thompson (1911-1994) wrote 75 books under various pseudonyms. His novels were marketed as “sexy books”  but he had literary aspirations…and he often achieved them with his strong characters, rich writing, and provocative plots, which were psychological and cultural dramas mostly set in his native Louisiana.