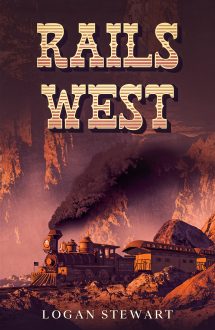 The iron beast surged westward…on rails driven into the unforgiving earth by men in love with danger.

After the Civil War, Big Scott Walker returns to Kansas to discover his ranch burned to the ground Confederate guerrillas…and that his father, his brothers, and the woman he loves have fled somewhere out west. He finds them, endanged by brutal men…and in fighting for them, must flee on murder charges, a wanted fugitive. He evades his pursuers by working on a railroad crew, hauling iron, laying track and battling the Arrapahoe…all while trying to clear his name and reunite his family. Ultimately, that means pinning on a Marshal’s star and confronting his enemies in a God-forsaken town at the end of the line, for the railroad and for him.

Logan Stewart was a pseudonym for author Les Savage Jr. (1922-1958). Western writer & critic James Reasoner calls him “one of the stars of the Western pulp field for more than a decade, from the time he broke in in the early Forties to his early death in 1958.” Savage Jr. wrote nearly a hundred short stories and two-dozen novels under his own name and various pseudonyms.