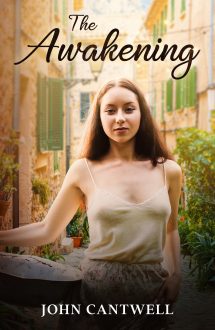 The Awakening By John Cantwell

“Two sexually frustrated men on a sleepy Mediterranean island mix with a beautiful girl and her scheming suitor. An interesting interplay of religion, love and morality with a fast-paced plot.” Houston Chronicle

Devout Catholic Robert Clover, haunted by a shattered marriage and the shame of his sterility, journeys to the Mediterranean island of San Jaime, where he hopes a miracle will cure his infertility. While there, he’s befriended by Buck, a Canadian writer who is battling his homosexual yearnings by bedding any woman on the island he can find. Robert soon falls passionately in love with Nieves, a twenty-year-old housekeeper, and when she becomes pregnant, he believes his miracle has been granted…or has it? While Buck, unable to ignore his desires, has torrid encounter with Nieves’ boyfriend Paco that leads to misery.

“Keen insight into the problems of love.” Syracuse Post-Standard

“The book runs the gauntlet of emotions from apathy, to love, to passion and to ultimate tragedy.” The Birmingham News

“An ironic island idyll is tainted by a sense of sin and sexual torment. All of this is touchy, for some taboo, material for a lighter entertainment which, essentially, this is.” Kirkus Reviews

Previously published as The Miracle on San Jaime.