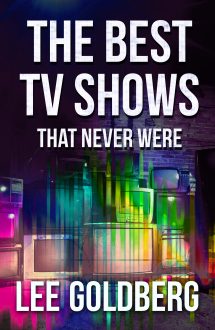 Best TV Shows That Never Were By Lee Goldberg

This lively and entertaining book looks at the three hundred best and worst TV series ideas—known in the industry as “pilots”—that never made it to primetime from 1955-1990. From the adventures of a Samurai D.A. to the antics of an invisible alien baby, Lee Goldberg reveals the most astonishing, funny, and bizarre shows that never were.

“You’ll slap your head in disbelief—try not to hurt yourself—at the idea of John Denver as a singing FBI agent. You’ll wonder whether Joe Penny as a samurai district attorney would have been funnier—unintentionally—that John Belushi’s ‘Saturday Night Live.’ For tube-historians, this is a must see.” — People Magazine