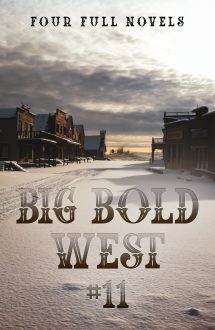 BLOODY KANSAS by Chuck Martin
When Silent Sutton rides into Dodge City, Kansas, he finds a hell town of gun battles and killings. So he pins on a Marshal’s badge and uses his lightning fast gun to bring peace and justice to the toughest city in the west. But Sutton does it knowing that there’s one gunman in town who can beat him to the draw — Stud Bailey, the self-styled boss of Dodge, who is waiting to take the Marshal’s woman and bury him on boot hill.

HORSEMEN FROM HELL by Homer Hatten
“A lusty adventure story of brawling men and seductive women.” Springfield News-Leader
“It’s strength and vitality make it a proud epitaph for Hatten,” Pensacola News Journal
Melissa McCutchen heads west of the Mississippi, searching for her husband, a wanted fugitive. On her journey she crosses paths with Dale Mallonee, a part Cherokee, who rides the wildlands with six Indians, his “horsemen from hell,” searching for a former partner who did him wrong…and for new land, and new women, to conquer and tame.

SHADOW RIDERS OF THE YELLOWSTONE by Les Savage Jr.
Few men ever cross the boundary between the Chinook Basin and Yellowstone and come back alive…but now the Banning brothers, tough and sure of themselves, are charging in the savage land to find their lost cattle, battle vicious bandits and confront their own deadly, sibling rivalry.

PLUNDER RANGE by Homer Hatten
“Savage, exciting, and atmospheric. Homer Hatten delights in putting his characters through intense physical punishment” Pulp Serenade
Neil Cain rode into San Marcial wild for vengeance, knowing he’d end up dangling from hangman’s noose….but he was going to take nine men to hell with him.