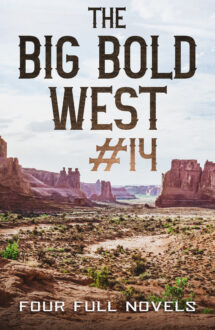 FOUR classic rip-roaring, action-packed western novels by four masters of the genre in one ebook edition.

Walt Slade is a relentless Texas Ranger… the mere sight of this tall lawman, with his lightning-fast draw, astride his great black horse Shadow, is enough to send most outlaws running for their lives. Not this time. Slade takes on a ruthless bandit in a bullet-lashed battle that turns a Texas countryside into an inferno of violence and retribution.

HERITAGE OF THE RIVER by Muriel Elwood

“A rousing good story…guaranteed to make the reader glance apprehensively around him and jump at the snap of a twig outside.” Saturday Review of Literature

Meanwhile, her brother Paul fares no better. He, too, is exiled from his their home after an affair…and becomes a fur trader in the rugged frontier…and a soldier battling the bloody English invasion.

Their exciting stories are told against the background of the robust young French colony on the St. Lawrence River that would become Montreal. It was a country of exiled aristocrats and their elegant women; of drinking, swaggering coureurs de bois from the trackless forests; of hard bitten settlers pitting their strength against the elements, bedeviled by the whims of a debauched King.

THE GUNS OF HELL VALLEY by John Prescott

A powerful novel about the untold, deadly aftermath of the Lincoln County war, and the desperate men, aflame with hate, who rose up for one more, final battle.

Near the center of New Mexico, where the Guadalupe and Sacramento Mountains rise high above the sea of grass and desert, lies the bloodiest earth in the Southwest, the site of the bloodiest private war in western history — the Lincoln County Cattle War. But in the ashes of the epic struggle, the wounded and the hateful were left behind, outcasts desperate for survival, led by a gun man who swore to bring them home from hell.​​​​​​​

TOWARDS THE SUNSET by Muriel Elwood

“An vivid tale of life lived gloriously in the face of privation and hardship that stirs the imagination.” The Daily Oklahoman