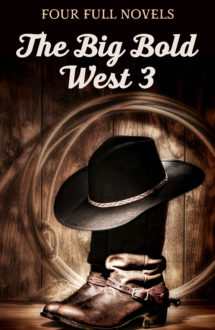 The corrupt town of Calder, known as The Devil’s Doorstep, is brutally run by Mayor Monk Malone as his personal domain and as a haven for gamblers, swindlers, rustlers and outlaws… to the horror and dismay of the local newspaper and the town Reverend, who are virtually powerless to stop him. But then a stranger named Borden rides into town, playing all the factions against one another. It’s not clear whose side he’s on… or if he’s only looking out for his own, mysterious interests. All anybody knows is that he’s the fastest gun in the territory and is not afraid to use it.

Somewhere on a God-forsaken, dusty ranch is a lost billfold containing $60,000…in this western classic, back in print for the first time in 80 years.

The money belonged Stan Cogswell, but a swindler named Milt Prowers tricked him out of it… then someone stole it from the Prower…and then the thief lost it among the brambles on the endless mesa. If Stan doesn’t find it, he’ll lose his ranch…but he’s got to battle a horde of treasure hunters who are willing to kill for it.

Perry rode into Tinaja to blast out a clever and dangerous crook. The only way he could do it was to disguise himself as the famous outlaw, making him bullet-bait for every gun-hawk in the wild west.

THE VALLEY BEYOND by William Byron Mowery

Trapper and ex-con Jim Hayden spends days stalking the Indian who has been robbing his fur traps…and is shocked to discover it’s actually a desperate, white woman, a one-time captive of the Dinneh Indians, fleeing for her life. Now the two of them are on the run together in the frozen north, chased by vengeance-mad Indians and facing a howling blizzard.

“A story which lover of adventure and danger will welcome… exciting from beginning to end.” The Shreveport Journal

“A stirring tale of peril and adventure…  well-constructed plot against the background of the bleak and bitter beauty of the Northland.” Burlington Daily News