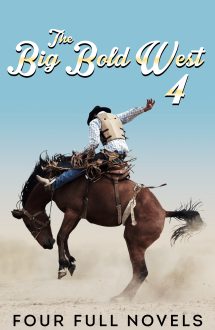 Ex-Marshal Joe Raiford wants to settle down to a quiet life…and is scouting for the right spot for his ranch…when a wounded man, running from two gunmen, staggers into his camp and embroils him in a conspiracy involving cattle rustlers, a crooked lawyer, blood-thirsty killers, and a string of murders that could spark a range war.

Jeff Lantry was a man who lived on his luck…mostly on riverboat casinos… and his luckiest day was when he was penniless and stumbles on a lynched bank robber’s hidden loot. He rides into Durango with money in his pockets, which he uses to become a successful cattleman. But he never loses the sense of guilt that his life is built not just on luck… but on a lie. The six-gun he wears is strictly for show, until Jess Jallison gives him thirty days to sell out… and get out. But even though he isn’t a gunman, Lantry won’t back down or run, not with his reputation and fortune at stake, or his demons to battle.

RIDE THE WILD WIND by C. William Harrison
“An entertaining novel about an attempt to stir a revolt in the troubled west during the Indian Wars. It brings history to life.” San Francisco Examiner

Ex-buffalo hunter and former lawman Kirk Calloway is searching for a woman he briefly met on the trail in Kansas…a romantic quest that takes him into a violent corner of New Mexico, where the railroad has brought in rustlers, bushwhackers, spoilers, cowpunchers and cattlemen all hoping to find their fortune amidst by the sweat, tears and bloodshed of the savage, crimson mesas. And it’s where Alfredo Baca, the fearless young aristocrat and cattleman, wears the lawman’s badge and thrives perilously on the risk and danger…and will either become Calloway’s friend or deadly enemy.