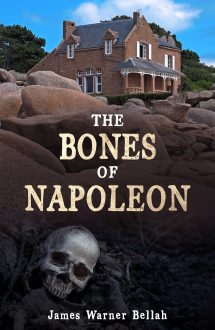 The Bones of Napoleon By James Warner Bellah

“A well-paced story of intrigue with a startling climax.” Pittsburgh Press

It’s 1940. Cynical New York City newspaper reporter Matt Davanan inherits a mansion in Maryland from a distant Uncle he didn’t know he had … who was killed in a suspicious hunting accident…a story certainly worth investigating. But shortly after Matt get this news, a striking young woman arrives from England, sent by an English lord who believes that Napoleon escaped from exile on St. Helena island to America… and that his bones are buried on the property. As if that wasn’t strange enough, another woman shows up, certain that she knew Matt a century ago in a previous life…and that she died for him. Matt is tempted to shrug it all off as craziness…until someone tries to murder him. And that’s only the beginning of his troubles.