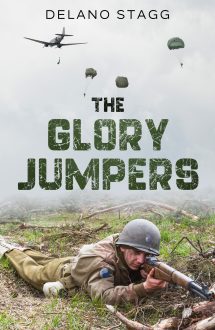 The Glory Jumpers By Delano Stagg

Saving Private Ryan meets The Dirty Dozen in this long-lost, epic war novel, back in print for the first time in nearly 60 years.

“Delano Stagg” was the pseudonym for Mel R. Sabre and Paul Eiden, both of whom saw combat as paratroop non-coms during WWII. Their joint decorations included the Purple Heart, two Silver Stars, a Bronze Star, five campaign stars, a brace of Presidential Unit Citations, adn the Frech fourragere of the Croix de Guerre. Both later became newspaper reporters, authors and screenwriters.