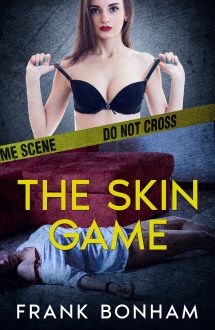 The Skin Game By Frank Bonham

Ex-cop turned parole officer Sam Garrett’s latest case hits close to home — a paroled sex offender and ex-cop named Gene Foreman, who he worked with on the force and who was imprisoned for statutory rape. Was she a honey-trap…and was Gene set-up for a fall? That’s a good question, but Gene’s troubles are only beginning. Soon after he’s released, police discover that there’s a sexual psycho who preys on women, getting them to pose for naked photos before he brutally murders them. Gene immediately becomes the top suspect, thanks to a cop named Donovan with a burning hatred for the man. Sam thinks his old friend is innocent, but proving it won’t be easy…and if he’s wrong, then every second Gene is free, more women are in danger.

“There are some unexpected twists along the way, and the novel isn’t always about what it seems. There’s plenty of sexual titillation, and characters who aren’t what you think they are. This book is something really special.” Paperback Warrior