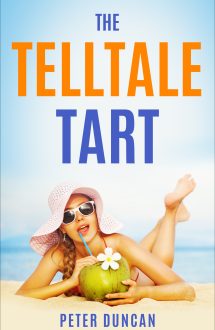 The Telltale Tart By Peter Duncan

Reporter Laura Ames and magazine photographer Pete Farrell fly out to rich novelist John Hope Hamilton’s private, tropical island to interview him.  But as soon as they arrive, they discover that the novelist’s secretary Mary Belle has died under mysterious circumstances and that Cuba, his voluptuous new secretary, is doing a lot more for him than taking dictation. The real story here could be murder… and  the killing might not be over.

“There are a lot of sexual hijinks of the 1950s Playboy variety, including a couple of pretty funny sex scenes. Duncan’s touch is light, and his style is smooth. This one’s fun to read.” Bill Crider

“Self-deprecating and making humorous hay out of his sexual frustration, Pete is a fun narrator and it’s his voice that makes The Telltale Tart a comic romp.” Strange Type