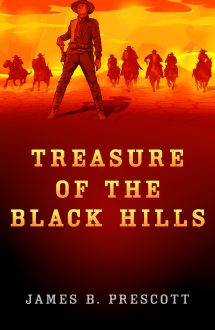 TREASURE OF THE BLACK HILLS By John B. Prescott

“Another book that neatly sidesteps the easily recognizable clichés of a traditional Western, Prescott’s tale of gold-seekers venturing into the harsh Black Hills of the Southwest (not to be confused with those of Dakota fame) explores a variety of characters in-depth. It’s gritty, tough and satisfying.” True West Magazine

A novel of gold, the men who hungered after it, and the harsh, bitter land they clawed it from… by John B. Prescott, a Spur Award winning author.

“Prescott writes in the style of A.B. Guthrie in The Way West and The Big Sky. He tells of human emotions, heroic action and exciting adventure.” St. Louis Post-Dispatch

“Prescott writes of heroism and adventures with a fine flair for the feeling of the country and the spirit of the times,” Oakland Tribune