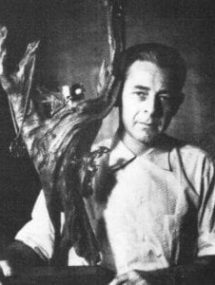 Henry Steig (1906-1973) was a man of many talents. He was a jazz musician, author, sculptor, journalist, commercial artist, screenwriter, cartoonist (as “Henry Anton”), painter, and a renowned jewelry maker with his own shops in New York City and Provincetown, Massachusetts. His store at 590 Lexington Avenue at 52nd Street was immortalized as the background for the famous scene in The Seven Year Itch when Marilyn Monroe’s dress blew up while she was standing on a subway grate. Steig’s brother William was a cartoonist for The New Yorker and other magazines.

Three ground-breaking, hard-boiled novels of the jazz age in one volume.
SEND ME DOWN by Henry Steig * DUPREE BLUES by Dale Curran * GANGSTER JAZZ by Tom Ardies

The ground-breaking, compelling, and vividly realistic saga of two brothers in the world of jazz, from the roaring twenties to the 1940s, back in print for the first time in 80 years.