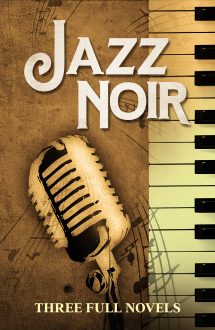 Three ground-breaking, hard-boiled novels of the jazz age in one volume.

SEND ME DOWN by Henry Steig

“One of the most important fictional contributions to the social history of the United States.” Boston Post

Frank and Pete Davis were born with musical talent, blazing ambition, and a shared dream of becoming musicians…but their skills, their demons, and their desires would take them on very different paths and into big money, brutal competition, fast women, naked ambition, sudden violence, and beautiful music. One brother chooses the safe, conventional route through college, educating himself in music, and becoming a bandleader, the King of Swing… while the other hits the road with his sax, moving in the jazz underworld of roughneck bars, shady dance halls, and eager women…their two lives converging again in an explosive, emotional climax that could destroy them both.

“This, one of the earliest novels about a jazz musician, might just be the best when it comes to capturing both the business and the art of performing jazz.” The Neglected Books Page

Dupree is a hot trombone player who plays his music from his heart. Then he meets Betty, a singer whose sweet music comes from her aching desire. What she wants is a diamond ring, but if he gets it for her, it will cost him much more than money, plunging him into a whirlpool of sex, betrayal, gambling and murder.

“When a man is addicted to liquor and hot music, he will not necessarily get into trouble. But add a beautiful blonde — and he is doomed.” Hartford Courant

An epic family saga of the jazz age, when bathtub gin flowed, flappers were everywhere, and organized crime ruled the streets

Greg Meister was a farm boy who went off to war…and when he came back, everything was different. He meets Tandy Crain, a rich girl gone bad, in a Harlem jazz club, and falls in love. Together, they build a family and an empire, their lives dangerously entwined with music, the stock market and a ruthless mobster named Al Capone. It was a love built on dreams in a country built on promise. But when that promise is violently broken, Greg and Tandy must fight for their family’s survival in a brutal new country.