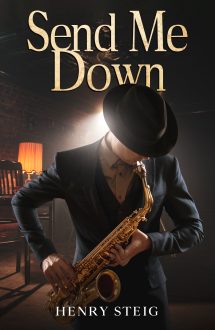 Send Me Down By Henry Steig

“One of the most important fictional contributions to the social history of the United States.” Boston Post

The ground-breaking, compelling, and vividly realistic saga of two brothers in the world of jazz, from the roaring twenties to the 1940s, back in print for the first time in 80 years.

Frank and Pete Davis were born with musical talent, blazing ambition, and a shared dream of becoming musicians…but their skills, their demons, and their desires would take them on very different paths and into big money, brutal competition, fast women, naked ambition, sudden violence, and beautiful music. One brother chooses the safe, conventional route through college, educating himself in music, and becoming a bandleader, the King of Swing… while the other hits the road with his sax, moving in the jazz underworld of roughneck bars, shady dance halls, and eager women…their two lives converging again in an explosive, emotional climax that could destroy them both.

“This, one of the earliest novels about a jazz musician, might just be the best when it comes to capturing both the business and the art of performing jazz.” The Neglected Books Page

“As an explanation and justification for red hot jazz and the men who make it, Send Me Down is close to perfect.” Madisonville Messenger

“Henry can be wistful and ribald at the same time; he can produce a belly laugh, a cynical grin, and a salty tear all at once. The novel stands soundly on truly perceptive, sophisticated and generally bawdy conversations and reflections.” – The Saturday Review

“Valuable for it’s realistic descriptions of life on the road, the economics of the music business, the conflict between art & entertainment, and the destructiveness of marijuana to the world of swing music.”  David Rife, author of Jazz Fiction: A History and Comprehensive Reader’s Guide

Henry Steig (1906-1973) was a man of many talents. He was a jazz musician, author, sculptor, journalist, commercial artist, screenwriter, cartoonist (as “Henry Anton”), painter, and a renowned jewelry maker with his own shops in New York City and Provincetown, Massachusetts. His store at 590 Lexington Avenue at 52nd Street was immortalized as the background for the famous scene in The Seven Year Itch when Marilyn Monroe’s dress blew up while she was standing on a subway grate. Steig’s brother William was a cartoonist for The New Yorker and other magazines.