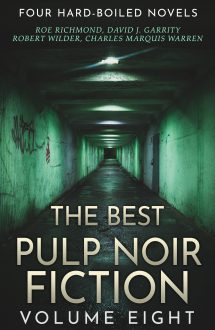 FOUR hard-boiled, pulp noir novels written by 4 masters of the genre, back-in-print for the first time in 60 years, in one collection bursting with unbridled passion & crime fiction greatness.

The novels are:
WALK WITH EVIL by Robert Walker
There is little chance of redemption in Redemption Cay, a Florida town where a million dollars in stolen cash was buried decades ago… and now a brutal mob boss, recently released after twenty years in prison, is coming to find it. But he’s not alone. A young reporter is also on the trail…but telling the story could jeopardize the life of the innocent woman he loves.

FORCED GIGOLOS by Roe Richmond
An ex-soldier’s search for his missing lover leads him to a house where men are forced into the sex trade as gigolos for desperate women, including a Detroit widow with uncontrollable desire, a suburban housewife avenging her faithless husband by acting out her rage in bed, a runaway from a boarding school, an artist who likes to do more than just paint nude men, and a psychologically-unhinged Latina who gets off on violence.

CRY ME A KILLER by “Garrity” (David J. Garrity)
Detective Sgt. Walter Patterson is one of the few cops in the dark, miserable, corrupt city who can’t be bought or scared off, who isn’t a puppet of ruthless mobster Vince Ballanca. But Patterson is in a worse hell. He’s in love with the fat mobster’s wife…and to take her away from Ballanca, and survive, he’ll have to become a killer.

DEAD HEAD by Charles Marquis Warren
​​​​​​​Christmas Eve, 1949. A man wakes up dazed on the streets of Baltimore after suffering a beating that wipes away his memory…and becomes the target of vicious mobsters who are convinced he’s faking amnesia to hide a $300,000 secret. Now he’s on the run, fighting for his life, and searching for his past…leading to a stunning climax in a snowy, deserted amusement park on a cold, dark, winter night.