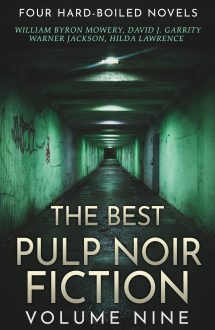 The novels are:
KISS OFF THE DEAD by “Garrity” (David J. Garrity)
Max Carey is a hard-nosed NYC cop who takes bribes to satisfy his wife’s expensive tastes. But when his corruption is exposed, and he’s thrown off the force, his wife leaves him and runs away. He spends several years chasing her down. When he finally finds her in Florida, she’s murdered and the crime is pinned on him by the underworld, who also send some killers to rub him out. Now Carey is out for bloody revenge and his own brand of tough justice.

OUTLAW BREED by William Byron Mowery
It’s 1936. Noel Irving, ex-chief of the Secret Squad of the Royal Canadian Mounted Police, witnesses a brutal killing that sends him on an epic, harrowing quest deep into the Canadian wilderness, and to the furthest edges of the continent and humanity, in his relentless pursuit of bloody, final justice.

LUST FOR YOUTH by Warner Jackson
Alice Ingram is a bartender and single mother who can’t seem to tame her sensual emotions, a persistent, burning craze for strong, physical release… without it, she is plagued by persistent headaches, anxiety and loneliness. Lately, she’s found solace and ecstasy in the arms and dusky body of much younger Eddie LaRose, a gambler evading the law. And who, the police warn her, might also be a thief and murderer. She lives with her daughter Freita, a recent Junior College grad and aspiring dancer, who suffers from the same, physical torments as her mother… and doesn’t know if she can wait until marriage to slake her erotic desire. She can’t. And she won’t… and soon she’s pitting herself against her mother for Eddie, who gladly beds both women, unaware that he’s making the riskiest bet of his life.

COMPOSITION FOR FOUR HANDS by Hilda Lawrence
A woman is trapped in her own body. She’s speechless, paralyzed, and truly helpless, cared for by her seemingly loving family. But she knows with chilling certainty that one of them is trying to kill her…and will soon strike again…and she is unable to tell anyone or defend herself. Or is she?

*BONUS* THE HOUSE by Hilda Lawrence
​​​​​​​Isobel Ford returns from a life spent almost entirely in boarding school to the remote, four-turreted house in the woods that has always frightened her…and only days later, her eccentric father kills himself by driving off a cliff. She’s haunted by his shocking death…and by the house itself, which she knows in her bones hides terrifying secrets. And yet she is determined to discover the truth…no matter how horrifying it will be.