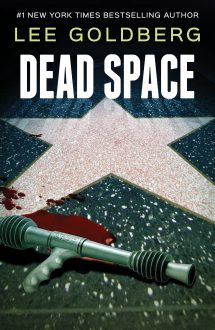 Ex-cop Charlie Willis handles “special security” at Pinnacle Pictures. His job: to protect the studio and its stars, to stop scandals before they explode, to keep the peace in the land of make-believe. When Pinnacle revives the cult, 1960s TV series Beyond the Beyond as the cornerstone of a fourth network, two powerful forces fight for control of the show—a talent agency that uses blackmail, torture, and murder to keep its clients on the A-list, and a homicidal legion of rabid fans led by an insane actor who thinks he’s in outer space.

This book, the sequel to My Gun Has Bullets, was originally entitled Beyond the Beyond when it was published by St. Martin’s Press in 1997

“Goldberg uses just about everything he can think of to send up the studio system, fandom, Star Trek, Trekkies, agents, actors… you name it, he’ll make you laugh about it.” Analog

“An outrageously entertaining take on the loathsome folkways of contemporary showbiz,” Kirkus Reviews

“Mr. Goldberg has an observant eye and a wicked pen!” Washington Times

“[It] reads like a modern-day Alice in Wonderland set against the venal world of the TV industry. It’s wonderfully revealing and uncannily accurate,” Vancouver Sun (Canada)

“Some of the easily recognizable actors, agents and producers who are mercilessly ribbed may find it hard to crack a smile at the author’s gag-strewn prose, likewise those seekers after politically correct entertainment. But the rest of us should have no trouble….the novel’s satiric slant is strong enough to have an effigy of Goldberg beamed into outer space at the next Star Trek convention,” Los Angeles Times

“Pinnacle Pictures has decided to revive a 25-year-old cult sci-fi TV show called Beyond the Beyond, but somebody keeps killing off the new cast. Is it the Hollywood agent who eats human flesh? The aging actor who still thinks he’s a starship captain? The fans who live only to attend conventions? This sharp roman a clef goes where no Hollywood satire has gone before—altering just enough facts to avoid the libel courts but still smacking of a certain je ne sais Trek. It probably won’t make Goldberg, a television writer and producer (Baywatch, Spenser: For Hire, seaQuest), the most popular boy on the Paramount lot, but it’s a stingingly funny novel just the same.”   Entertainment Weekly

“As in his riotous novel My Gun Has Bullets, TV writer/producer Goldberg once again bites the hand that feeds him, laughing all the while. Inspired silliness,” Publishers Weekly