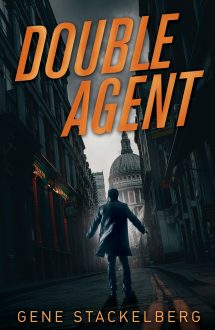 A Classic Suspense Novel of Cold War Espionage and Betrayal

Bill McLean is an unjustly disgraced CIA agent who desperately tries to clear his name by hunting down a rogue Russian spy in London. To pull it off, McLean must navigate a mine field of  foreign agents, double-crosses, conspiracies, and murder.

“Gene Stackelberg” was the pseudonym of Arthur Eugene Adams (1917-2007), a former soldier who became a professor of Russian history and a CIA consultant. He also wrote fiction (Quimby, Special Agent, Moscow Nights, etc) and non-fiction (An Atlas of Russian and East European History, Stalin & His Times, The Russian Revolution & Bolshevik Victory, etc) and, for many years, was an administrator at Ohio State University, where there is a street named in his honor.

Double Agent was adapted into the 1968 spy movie The Man Outside starring Van Heflin.