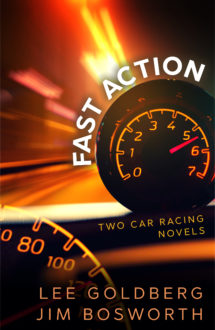 FAST TRACK
Speed. It’s exhilaration. It’s freedom. It’s risk. It’s escape. It’s sex. And it’s money… fast money, quickly won and quickly lost.
But for four young urban street racers in L.A., speed is something else entirely. It’s a way of life… and the only way they know that they’re alive. And they need to prove it to themselves…every second of every day. Not just in their cars. Not just on the streets. (And if you like the book, don’t miss the hit feature film version, loaded with street racing action and breathtaking stunts, starring Hallmark movie superstars Erin Cahill and Andrew Walker, now available on Amazon Prime and on DVD.)

SPEED DEMON
Car racing in 1958 is not just a sport for Martin Janis… it’s his life. After a series of deadly triumphs melting California asphalt with his speed in a quick-silver, Italian-made car, driving for a wealthy sportsman, Martin accepts a dream offer from an Italian car-maker to race on the man-killing tracks of Europe. The battles Martin has to fight within the legendary car company are almost as dangerous as the curves of the track…and the curves of Anna, a glamorous, beautiful and hot-blooded woman who is using every tool she has to separate Martin from Charlotte, his home-town love who travels with him from the U.S. His personal and professional challenges come to a fiery climax at the German Grand Prix on the treacherous Nuremburg Ring in an unforgettable, heart-pounding race.