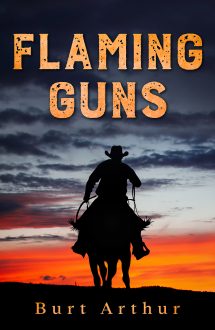 Mustang Marshall was just one man with a slow drawl and a fast gun, standing tall against an outlaw empire…

The bandits in Chenango Pass didn’t think twice about blowing off Sheriff Simms’ head…because they knew nobody had the guts to chase them down. But then Mustang Marshall became the new lawman, and he was all guts. He built a jail and soon packed it with renegade scum. Because nobody was above his law, not even the son of the territory’s biggest outlaw. And that’s when hell came raining down on the Mustang Marshall…and he fought back with flaming guns.

This book, previously published as Chenango Pass, was the third novel in Arthur’s Mustang Marshall series, which also included The Black Rider, Valley of Death and Mustang Marshall (aka Lead Hungry Lobos).