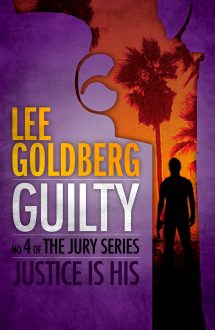 Brett Macklin faces his greatest adversary yet–a ruthless, professional hit woman, seductress and master of disguise who launches a campaign of terror and bloodshed against him, pushing the vigilante to the emotional and physical breaking point, unleashing a bloody killstorm on the L.A. streets.

“”GUILTY is a direct sequel to PAYBACK, so in no way can I go into details.  But Goldberg holds nothing back in this one, that’s for sure. Bodies pile up real quickly, proving Macklin is not one to screw with.” —Bruce Grossman, Bookgasm

(This is the fourth book in the series and was previously released on the Kindle as .357 VIGILANTE: KILLSTORM)

Other books in the series: JUDGMENT * ADJOURNED * PAYBACK

Lee Goldberg is a two-time Edgar & two-time Shamus Award nominee and the #1 New York Times bestselling author of over thirty novels, including the Wall Street Journal bestseller True Fiction, fifteen Monk mysteries and the first five internationally bestselling Fox & O’Hare books (The Heist, The Chase, The Job, The Scam, The Pursuit ) co-written with Janet Evanovich, and the #1 Amazon bestselling Eve Ronin novels (Lost Hills, Bone Canyon, Gated Prey, Movieland). He’s also written and/or produced scores of TV shows, including Diagnosis Murder, SeaQuest, Monk, and The Glades and is the co-creator of the hit Hallmark Mystery Movie series Mystery 101. As an international television consultant, he has advised networks and studios in Canada, France, Germany, Spain, China, Sweden, and the Netherlands on the creation, writing and production of episodic television series. He is also the cofounder of the publishing company Brash Books.