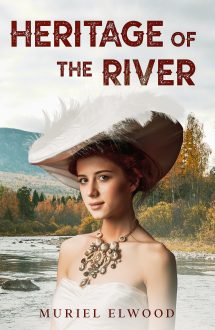 Heritage of the River By Muriel Elwood

Meanwhile, her brother Paul fares no better. He, too, is exiled from his their home after an affair…and becomes a fur trader in the rugged frontier…and a soldier battling the bloody English invasion.

Their exciting stories are told against the background of the robust young French colony on the St. Lawrence River that would become Montreal. It was a country of exiled aristocrats and their elegant women; of drinking, swaggering coureurs de bois from the trackless forests; of hard bitten settlers pitting their strength against the elements, bedeviled by the whims of a debauched King.

“A rousing good story…guaranteed to make the reader glance apprehensively around him and jump at the snap of a twig outside.” Saturday Review of Literature

“There is certainly enough blood and thunder, lavish pageantry, and lusty love-making to entice….” Hartford Courant

“Elwood has packed everything into this. There is warfare, there is intrigue, there is romance.” New York Herald-Tribune

“One of the most fascinating historical novels written in some time. Heritage of the River combines acti0n, color, atmosphere and characterization in equal proportions. Fascinating reading.” The Gazette (Montreal)

“A harrowing, robust historical novel, the colorful, swift-moving story of Canada in the late 1600s…vividly portraying Quebec and Montreal and the hostile Indian tribes with whom the French waged almost constant war.” Philadelphia Inquirer

“A rich picture of pioneer life filled with drama and intrique.” The Province (Vancouver, BC)

“An eventful, vividly emotional, superbly-scened novel of life in Canada in the late 1600s and the story of two exceptional characters.” The San Luis Obispo Tribune

The first novel in the epic Courville-Boissarts quartet. Muriel Elwood (1902-1976) was the author of several novels and was a longtime resident of Ojai, California, where she owned a gallery and also taught creative writing at the local college.