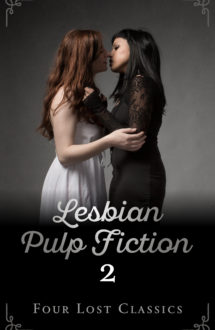 Four bold, lost classics by March Hastings, aka Sally M. Singer, that broke new ground in lesbian pulp fiction…and that have been out of print for nearly sixty years.

THE THIRD THEME
Sharon Porter is a single, Manhattan book editor in the midst of a turbulent affair with her boss. But at a writer’s party, Sharon meets Leda, a married woman who is fighting her true, sexual nature. They immediately feel a powerful attraction, one that can’t be denied. It’s tormented bliss. But then Leda’s husband discovers their affair. So the women run off to Sharon’s home town, desperate to experience their passionate moment in time, to explore the possibility of a different kind of life, love in “the third theme,” before the world falls down on them for indulging their forbidden desires…

CRACK-UP
Karen is a woman trapped in a marriage to an impotent man…who finds the passion she craves with other men…and in the willing arms of Jean, a married woman who can never be satisfied by any man. It is the story of Karen’s emotional and physical torment as she seeks what her body craves… and the love her soul needs.

THE DEMANDS OF THE FLESH
Ellen is a widow who pits the propriety of her social position against the awful torment of her desperate emotional and physical needs. For her, the demands of the flesh in particular have become overpowering. She enjoys physical satisfaction with the hedonist Raoul, but it leaves her feeling degraded. She gets comfort and sweet release with the lesbian Nita, and at least finds a tentative peace, but can she go on that way? Her answers may lie with Richard, a medic who helps lead her through the labrynth of emotional and sexual conflict that is threatening to tear her apart.

VEIL OF TORMENT
There’s the Ivy Sherwood the public knew: the actress, the glamorous, beautiful darling of the stage, living a storybook life of champagne and roses with her glittering future ahead of her. And then there’s Ivy off-stage, away from family and friends, prowling the streets, hardly recognizeable without make-up, her eyes shining with tension and craving, picking up any stranger, going into any dingy bedroom. She’s running furiously through her days, seeking escape, needing release, fighting the passionate demon which lives inside her, torturing her, wildly demanding more liquor, more men, more women, anything to sate her uncontrollable sexual desire.

This book was banned, deemed “unmailable” by the U.S. Postal Services, in 1960 and rated “indecent” in the U.S.A and Canada by the National Organization for Decent Literature. Now back in print for the first time in over sixty years.

“March Hastings” was one of the pseudonyms (along with Laura Duchamp, Viveca Ives, and Alden Stowe) of Sally M. Singer, a lesbian writer born in 1930s and the author of more than 130 novels, across many genres. She is undoubtedly best-known for her string of ground-breaking, lesbian-themed, sexy pulp paperbacks in the 1950s and early 1960s, including The Outcasts, Three Woman, and By Flesh Alone. She wrote many other sexy novels as Hastings, not all of them with a lesbian theme. However, by the late-60s/early 70s, the “March Hastings” pseudonym was co-opted by her publisher and became a house name for many different authors penning lurid paperbacks, diluting and confusing her early legacy as an influential author of lesbian pulp and straight erotic fiction.