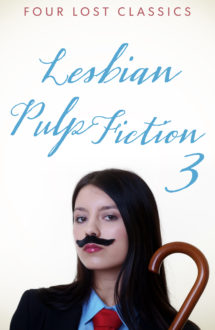 Four lost, ground-breaking classics of lesbian pulp fiction, back in print for the first time in 60 years.

BY FLESH ALONE by March Hastings
This is the story of Lila, who has been married for some years…to a man who doesn’t seem to desire her. In frustration, and desperate for physical release, she leaves her husband, turning first to a woman who was once her lover. Her lesbian passions reawakened, she leaves her old lover and seeks new excitement, and a fullfilling relationship, with another woman, a bold, self-confident, moody painter. But to Lila’s surprise, despite her love and attraction to the passionate artist, she still feels a deep, emotional pull to her husband.

UNNATURAL by Sloane Britain
Allison loved Lydia. She loved her so much that sometimes she thought it was wrong. She felt that there must be something sinful about a love so strong it blotted out everything else. Lydia was Allison’s whole life… until one night, when she went to a wild, bohemian party and met Cal Staton. He certainly seemed interested… and everyone was always telling her to settle down… but Cal Staton was a man, and men had hurt her so much. Perhaps she would be better off staying with Lydia, who turned the world away when she took her in her arms. Lydia, who could make her melt with a glance… and climb to the peaks of ecstasy with just a caress…

THE OUTCASTS by March Hastings
Two couples join for a weekend of escape from New York…a getaway that becomes a cauldron of boiling temptations that would ignite their long-buried desires and shatter their lives. It’s the story of Leigh Whitman, a rich, married woman who has everything a woman could desire…and yet aches to indulge her repressed, compulsive desires, aroused now by Jennie Dunbar…a emotionally-torn woman trapped in a decomposing marriage and who now finds herself yearning for a different kind of touch, a different kind of love…

OBSESSED by March Hastings
A woman with an insatiable desire for sex seeks help from a psychiatrist… telling him her emotional story, hoping to end her unquenchable lust, find her true self, and live a normal life. But is it too late?

“March Hastings was the pen name of Sally Singer. Her works focused on the world of wealthy people and their psycho-sexual troubles. Her plots are convincing, style confident, characters unapologetically passionate yet believable, and dialogues top notch.” The Book Haven For The Retro Reader