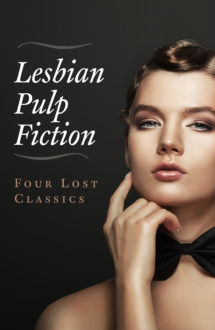 Four lesbian pulp fiction classics, scandalous and salacious novels in their day, back in print for the first time in sixty years.

MIMI by Lee Morell
Two couples pause in their pursuit of kicks and thrills to concoct a wild scheme. Leyra can’t bear children, so Mimi lends her body to Phil, Leyra’s husband to conceive a child. The baby will go to Leyra and Phil, who in return will give Mimi and Griff enough money to get married. There’s just one catch: Leyra and Phil both want Mimi for themselves… and Griff finds himself falling for another man. And then there’s the wild card… the lovely, dark-skinned Asia, who is half-everything, and whose sultry body knows strange hungers.

THE GIRLS OF THE FRENCH QUARTER by John Burton Thompson
The story of three girls who run a household of the dubious yet sprightly kind in the French Quarter of New Orleans. Their purpose is to love when and how they chose, their habit is to follow their desire wherever it leads. Favre experiments with a father but settles for his sons. Arden seeks the caressses of an artist… but also longs for Favre’s kisses. And there’s T’Ling, a sweet girl with golden skin, who takes love where she finds it.

Previously published under the title Love and the Wicked City.

TWISTED LOVE by Mark Tryon
The notorious banned book that led to the landmark 1959 Supreme Court case Smith v. California protecting freedom of speech… back in print for the first time in nearly 70 years!

Nym was so beautiful that she could have any man she wanted… if she’d wanted a man. The shocking story of a woman who hated men and used her body to lure them to disaster… while seducing women to satisfy her own carnal desires. A banned classic, back in print for the first time in sixty years!

Nym O’Sullivan, the daughter of a lesbian, grew up hating men. But she’s far too sexy a woman to avoid their attentions, and one even forces her into marriage. In revenge, she makes him a slave to her incredible body… using him, taking what he has, then laughing at his ruination. And with that same, beautiful body, she lures her young lover, Johnny Martel, into a scheme to destroy him and reward her with vast wealth.

At the same time, Nym seduces women, innocent girls like Lynn Rawlins, a little blonde who will never be the same after her caresses…

THE FIRE THAT BURNS by Mark Tryon
The “female form divine” is photographer Pat Mulroney’s specialty. He’s one of the best glamor photographers in the business. Then he meets the depraved and voluptuous Nell, who takes her carnal pleasures in many ways… and who introduces him to Tony, the sensual and lusty lesbian stripper… Matta, the shy girl who loses her shyness, and so much more, entirely in front of the camera, and Janey, Nell’s lovely daughter, who wants Pat almost as much as her mother does.