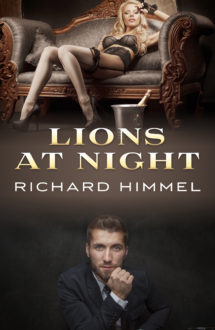 LIONS AT NIGHT By Richard Himmel

An undercover CIA agent living as a centerfold model and all-around hustler is the key player a deadly, global game of intrigue and death where the players include a sexually-ravenous TV newswoman, a powerful Mafia don, and foreign assassins…. but who are actually the hunters and who are the prey for the lions at night?