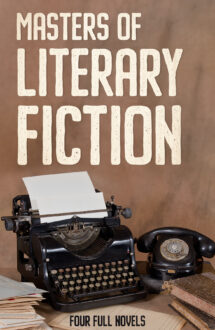 A Wind is Rising by William Russell
A searing, brutally realistic novel of race relations in the deep south, finally back in print for the first time in 70 years.

The Awakening by John Cantwell
“Two sexually frustrated men on a sleepy Mediterranean island mix with a beautiful girl and her scheming suitor. An interesting interplay of religion, love and morality with a fast-paced plot.” Houston Chronicle

Devout Catholic Robert Clover, haunted by a shattered marriage and the shame of his sterility, journeys to the Mediterranean island of San Jaime, where he hopes a miracle will cure his infertility. While there, he’s befriended by Buck, a Canadian writer who is battling his homosexual yearnings by bedding any woman on the island he can find. Robert soon falls passionately in love with Nieves, a twenty-year-old housekeeper, and when she becomes pregnant, he believes his miracle has been granted…or has it? While Buck, unable to ignore his desires, has a torrid encounter with Nieves’ boyfriend Paco that leads to misery…and possible salvation.

“Keen insight into the problems of love.” Syracuse Post-Standard

Beyond Defeat by Hans Werner Richter
“More powerful by far than All Quiet on the Western Front and much more frightening.” Minneapolis Star-Tribune

The Long Way North by Jim Bosworth
“An outstanding, beautifully written, epic novel about the end of the trail, the demise of an era. Bosworth is a great writer. His characterisations are superb and the emotional conflicts are portrayed with intelligent understanding. One does not forget these people. The result is a gripping story, moreover one of outstanding literary merit.” San Francisco Chronicle

Foreman Adam Childress doesn’t know how his men will face the relentless pressure of guiding 2700 longhorns from Texas to Montana, a treacherous, two-thousand mile trail criss-crossed with barbed wire fences and dotted with homesteads and land scarred more deeply by iron plows than by cattle hooves. And then there are the men themselves — tough, hard-eyed loners with nothing in common except their grim dedication to the job.