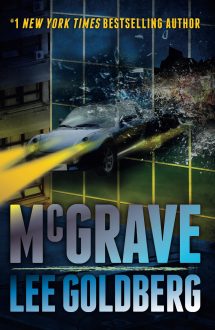 ​​​​​​​Hold on tight for a wild, rollicking, action-adventure novella that captures all of the fun, excitement and pure escapist pleasure of the Dirty Harry, Lethal Weapon and the Die Hard movies…with the humor, sharp dialogue and  inventiveness that you’ve come to expect from Lee Goldberg, #1 New York Times bestselling author of True Fiction.

Los Angeles cop John “Tidal Wave” McGrave is an unstoppable force of nature who always gets his man…even if it means laying waste to everything around him, including his own career…which is exactly what happens in his pursuit of Sebastian Richter, the ruthless leader of an international gang of violent thieves. When Richter flees to Berlin, McGrave chases after him…even though the cop doesn’t know the language, the laws, or the culture. But McGrave doesn’t care…he speaks the universal language of knee in the groin and fist in the face…and he won’t let anything get in his way.

“McGrave” is guaranteed to leave you breathless…and with a big smile on your face.

“Can books be better than TV? You bet they can — when Lee Goldberg’s writing them. Get aboard now for a thrill ride,” Lee Child

“Approaching the level of Lawrence Block is no mean feat, but Goldberg succeeds…” Publishers Weekly

“A wonderfully fresh voice in the mystery genre, Goldberg will delight fans of Janet Evanovich and Robert Crais,” – Rick Riordan, author of Percy Jackson & the Olympians

“Goldberg has a knack for combining just the right amount of humor and realism […]Goldberg is the real deal and should be on everyone’s must read list.” Crimespree Magazine

“Lee Goldberg is known for his cleverness and sense of humor. He shows how a masterful plotter can take a character in a comic situation and lead him into unexpected danger in an eye-blink,” – Thomas Perry, New York Times bestselling author