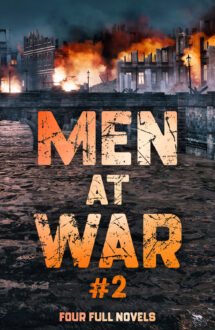 “Come on you sinners, hell is only half full!”

That was the battle cry of Marine Captain Cal Hobbes as he led his countless, seemingly suicidal charges in World War II. On island after island — Guam, Okinawa, Tarawa, Iwo Jima — his platoon always won their battles, no matter what the cost. Because for Hobbes, no sacrifice was too great, as long as someone else made it.

One of the most candid and acclaimed novels to arise from the ashes of World War II. This is the compelling story of 24 hours in the lives of soldiers in the amputee ward of an army hospital — and the nurses who are treating them. The men paid the ugly price of war. Shattered in body and spirit, they find themselves tormented by the desperate, human needs they can’t satisfy.

“You read a book with your eyes, but this one hits you between them. Here is truth-telling the rises above mere authorship.” Birmingham News

Season of Assassins by Geoffrey Wagner

The Stockade by Kenneth Lamott

A tough, revealing novel of men and women in the wake of war…in the tradition of The Naked & The Dead and From Here to Eternity.

Lt. Rossi is a tough Marine commander of a small, battle-weary platoon that’s guarding 5000 prisoners-of-war in a Pacific island stockade. But his harsh efforts to maintain order, combined with a cascade of cultural misunderstandings and the platroon’s consistentally brutal treatment of their prisoners, is raising the already simmering tension to the boiling point…and a possible massacre.

“The story of World War II has been written by hundreds of authors. Not one has written a more original story than Kenneth Lamott. A fine war novel.” Chattanoga Daily Times