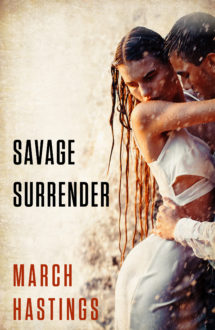 The story of a man and two women, each caught in a web of total passion . . . each forced to make a savage surrender.

Eve had everything a man could ask for… and a man didn’t have to ask twice. Brad, her husband, learned about this side of Eve the hard way.

Robin was different. When she lifted her arms for Chuck and whispered, “Be gentle, darling,” he knew she had not given herself often. He sensed in her body a trusting innocence that made him rein in his passions until her’s grew to a peak of savage surrender.

A pulp fiction classic, back in print for the first time in over sixty years.

“March Hastings,” at least initially, was one of the pseudonyms (along with Laura Duchamp, Viveca Ives, and Alden Stowe) of Sally M. Singer, a lesbian writer born in 1930s and reputedly the author of more than 130 novels, across many genres, in her lifetime. She is undoubtedly best-known for her string of ground-breaking, lesbian-themed, sexy pulp paperbacks in the 1950s and early 1960s, including Three Women, The Third Theme, Veil of Torment, and The Demands of the Flesh. She wrote many other sexy novels as Hastings, not all of them with a lesbian theme. However, by the late-60s/early 70s, the “March Hastings” pseudonym was co-opted by her publisher and became a house name for many different authors penning lurid paperbacks.