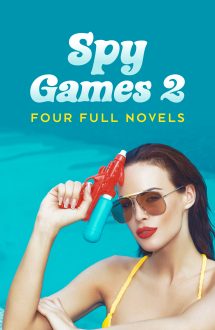 Four critically acclaimed novels of international espionage, action and terror…all in one volume.

THE SPY IN A BOX by Ralph Dennis
Will Hall is a CIA agent in a South American country on the brink of Civil War. But when the moderate, rebel leader that Hall covertly supported is assassinated, the spy resigns and retreats to a cabin in the North Carolina woods. His quiet, civilian life is shattered when an unknown adversary frames him for revealing Agency secrets, putting a kill-on-sight target on his back. Hall runs in a global chase to evade death, clear his name, and free himself from the flawless “box job” that could become his coffin.

“A breathless, lean noir thriller. Every line is razor sharp. Jason Bourne fans will find a lot to like.” Publishers Weekly

THE CHINESE KEYHOLE by Richard Himmel
It’s the 1950s, deep in the winter of the cold war. Ex-spy-turned-lawyer Johnny Maguire hadn’t visited Chinatown in a long time, and now he wasn’t there for the tourist attactions. Not that the Chinese Keyhole didn’t have plenty to offer–if you liked that sort of thin. Behind its pseudo-Oriental facade, the strip-club provided unusual entertainment for its off-beat clientele…and the performers were weirder than those who paid to watch them. Somewhere amongst the lust, sadism, and brutality there was the key to a Communist spy ring. And Johnny had to find it…through a mess of murder, mayhem, lust, and sadism he smashed his way to the Chinese Keyhole, where hell was set to music.

“Himmel was a great writer who knew how to keep a story moving. The Chinese Keyhole is sexy and exciting domestic spy fiction,” Paperback Warrior

ECHO CHAMBERS by Richard Himmel
It’s 1982. Angus MacGlendon is an American business tycoon targeted by the Chinese as a key player in their secret plot to become a global industrial and economic superpower…and they will do whatever it takes, from blackmail to violence, to get him to cooperate. He soon becomes a target of the CIA, KGB and spies from Taiwan. To survive, he must play a complicated game of international intrigue and terror with the fate of the world in the balance…

THE 23rd WEB by Richard Himmel
A cold-blooded Arab sheik and his army of psychopathic terrorists use blackmail, kidnapping and murder to force hundreds of rich Amercan Jews to stop giving money to Israel, part of a complex effort to economically cripple the Jewish nation. One man, Justice department attorney Peter Frankel, leads the fight against the insidious plot, drawing him into an inescapable web of twisted sex and brutal violence.