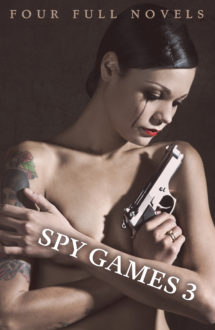 Four espionage thrillers by three masters of the genre in one action-packed volume.

LIONS AT NIGHT by Richard Himmel
An undercover CIA agent living as a centerfold model and all-around hustler is the key player a deadly, global game of intrigue and death where the players include a sexually-ravenous TV newswoman, a powerful Mafia don, and foreign assassins…. but who are actually the hunters and who are the prey for the lions at night?

A TALENT FOR KILLING by Ralph Dennis
Kane was a top CIA assassin until he suffered traumatic physical and psychological injuries in a mission that went horribly wrong. The Agency wiped his memory, gave him a new identity, and retired him to a life of mundane, anonymous domesticity. But his training, and his talent for killing, came back with a vengeance. He created a new life for himself as a killer-for-hire, righting wrongs for people who can’t find peace or justice any other way. He doesn’t know that his memories are fiction, or that he is always being watched, or that he’s been targeted for death by a rogue faction within the Agency.

“A breathless, lean noir thriller. Every line is razor sharp and without an ounce of fat. Jason Bourne fans will find a lot to like.” Publishers Weekly

CRY OF THE FLESH by Richard Himmel
Lazy playboy & lounge singer Buster Clayton, living in Italy on his ability to seduce wealthy women, is strong-armed by his brother, famous journalist Maxwell Payton, to help the daughter of a Russian diplomat defect with a cache of secret documents that will make an explosive story… and spark an international incident. But all is not what it seems, and soon Buster and the woman, a seductive and deadly cipher herself, are fleeing through Europe, running a gamut of sex, lies, betrayals, and certain death.

“A famous foreign correspondent with a story to get and a secret to hide, a fanatical girl communist who will stop at nothing to serve her cause, and a night club performer who gets way out of his depth add up to plenty of excitement.” Oakland Tribune

BRUTE MADNESS by Ledru Baker, Jr.
Mark Mitchell is a playboy atomic rocket scientist who marries the wrong woman…and is betrayed in the worst possible way. He is quickly arrested, convicted of treason, and sentenced to life in prison. But that’s only the beginning of his nightmare in this lightning-fast, insanely unpredictable, brutal Cold War noir thriller.