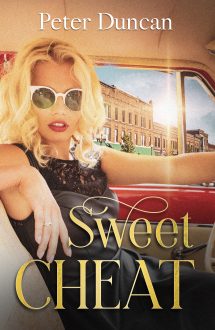 Greenhill Tennessee Police chief Buck Peters, an upstanding citizen and the deacon of his local church, investigates the murder Rita, a wealthy widow known as the “town tramp.” The prime suspect is Kip Belton, the police commissioner, whose alibi is that he was with his wife, Lacey, at the time of the killing. There’s just one problem with that story. Buck knows it’s a lie…because he was having sex with Lacey, his first love, when the murder happened. And that’s only the beginning of Buck’s problems. Rita kept a diary that could rip the town apart…

“A racy, fast-moving murder mystery packed in his usual, very clever style. The book is packed with humorous situations written in Peter’s own delightful manipulation of the English language.”  The Courier-Journal

“A hilarious detective story about crime in a small town, a skillful blend of sex and satire. ” Hartford Courant

“Peter Duncan” was a pseudonym for Butler Markham Atkinson Jr (1918-1994), a beloved humorist for the Louisville Times, Atlanta Journal, The New Yorker, Colliers, and The Saturday Evening Post. He also wrote  What Dr. Spock Didn’t Tell Us, The Telltale Tart, and several screenplays.