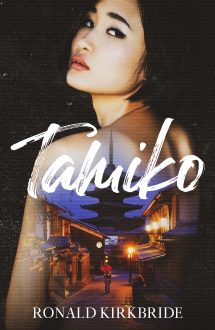 Ivan Balin is a Chinese-Russian photographer who lives in Tokyo but is about to get a visa to achieve his long-held dream of moving America. He is involved in heated affair with Faye Wilson, an intensely erotic, and intensely neurotic, American woman. But he also finds himself passionately drawn to the Tamiko, an aristocratic Japanese woman working as a librarian at the Tokyo Press Club. Tamiko is skilled in the arts of love, but forbidden to practice them with men of other races — until she decides that to win Ivan for herself, she must spirit him away to a mountain retreat and break every taboo she knows.

The novel was adapted into the 1963 movie A Girl Named Tamiko starring Laurence Harvey, France Nuyen and Martha Hyer, directed by John Sturges from a screenplay by Edward Anhalt.

“Kirkbride’s competent, professional hand has drawn a dramatic tale of which one of the strongest elements in the exotic setting itself.” New York Times

Ronald Kirkbride (1912-1973) was born in Vancouver, BC and is the author of many books, including Winds Blow Gently, Spring is Not Gentle, Only the Unafraid, and Dark Surrender, a book of poetry, four plays, and a biography of Guy de Maupassant. Tamiko is inspired by own romance with a Japanese woman.