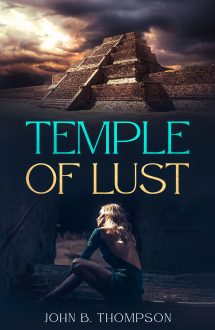 Temple of Lust By John B. Thompson

It’s the late 1950s. Ches Markham is an FBI agent stationed in D.C. who is known as a lady’s man…and who uses those skills for Uncle Sam. He’s set-up to be seduced, and snatched, by Dayne Holcombe, a beautiful Austrian seductress, as part of an elaborate scheme by Nazi fugitives involving stolen gold and diamonds. But it all goes violently wrong for everywone. Markham escapes and Dayne flees to Sierra Negro, a volcanic island off the Yucatan peninsula. Markham goes after her, on a mission to foil the plot…but becomes embroiled with Dayne in the passionate, pagan rituals of the ancient Mayans. If his raging desires don’t kill him, the deadly conspiracy could…and take our country down with him.